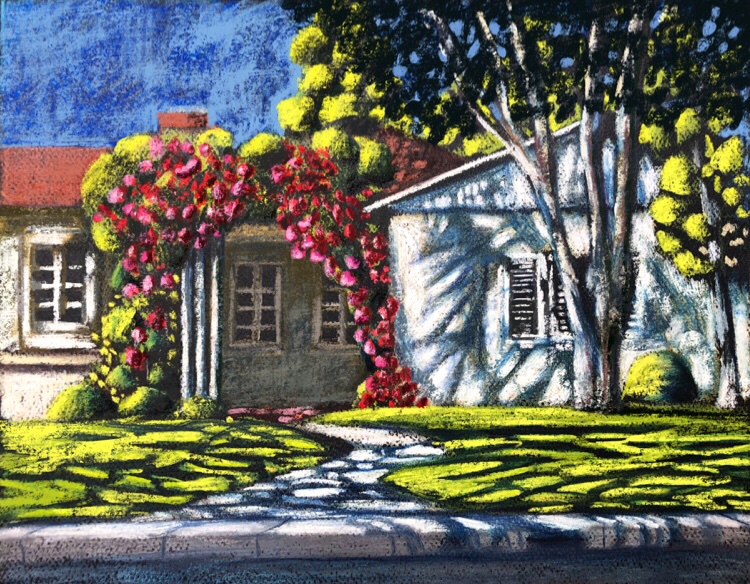 While I was drawing this I watched, in front of a house 2 doors up, a young couple quickly kiss, after which the young man crossed the street toward me, and the young woman went into the house alone.
‘Do you mind if I wait here with you until my girlfriend comes out?’ He said, looking down at me, smiling.
‘No,’ I said smiling back up at him, because even though I thought it an unusual request, I really did not mind at all.
‘What are you doing?’ asked the young man, who was probably about 17, and who had what I would lazily describe as a ‘mop’ of thick dark hair, and was wearing a thick flannel shirt, jeans and a pair of Caterpillar boots, ‘You drawing?’
Even though it was obvious what I was up to, I explained to my guest that I was drawing this house as part of a project I was doing.
He said ‘cool’ and as he sat down on the grass next to me, he asked me what the project was.
I told him about the hundred houses and he said ‘cool’ again, and then he said nothing else, so I went back to my drawing and podcast.
Occasionally I would look at him out of the corner of my eye, and he would be sitting quietly, moving his head slowly, looking around or picking at bits of grass.
After a while I got curious and asked him what the girl who went into the house was doing.
‘She’s a violin teacher. She’s teaching a kid in there.’ He told me, ‘She’s my girlfriend.’
‘Oh nice!’ I said.
‘Are you a musician?’ I asked him.
He laughed a little bit and said no.
Then we went silent again until he noticed a button pinned to my red flannel shirt that was lying on the grass.
‘Cool,’ he said, of the button which featured Donald Trump’s face, an arrow pointing to his gaping mouth and the words ‘World’s Biggest $hithole’ encircling it all.
‘Would you like it?’ I asked him, ‘I make them and hand them out to like-minded people.’
‘Yeh, cool, thanks!’ He said.
Then we went quiet for a good long time, until finally we heard someone calling out ‘Thanks’ and looked up to see the young woman come out of the house, crossing the road toward us.
‘Hi,’ she said to the young man who was now on his feet.
Then she said hi to me and I said hi to her.
‘She’s drawing the house,’ the young man said, ‘and she gave me this button.’
‘Awesome,’ said the young woman looking at the button, ‘that’s awesome.’
‘Okay then, have a nice rest of your day,’ the young man said, ‘and thanks for letting me sit with you.’
‘My pleasure.’ I said.
And as the young man took the young woman’s hand and they walked away, I realized that we’d sat there together for a good 3/4 of an hour and he hadn’t once looked at a cell phone.