While I was drawing this a man in a car stopped in the middle of the street, right in front of me, leaned out of the window and said- ‘What colour would you paint that relief there up above the window on the right?’
I looked up at it.
‘I’d leave it white,’ I told him, ‘otherwise it might stand out too much.’
‘Originally it was brightly coloured so I want to paint it.’ he said.
‘Well, maybe paint it the colour of the doors and window sills.’
The man looked up toward the relief, and then back at me.
‘I really don’t know.’
‘There’s a website called kuler,’ I told him, ‘it’s an Adobe website, and you upload an image of your house and it will generate a palette of colours based on the house, and you could choose something from the palette to paint it.’
‘What was it called?’
‘Kuler,’ I said, spelling it out, ‘from Adobe, you know, the software company.’
‘Okay, thanks.’ he said, sitting there in the middle of the road, his car idling.
‘Where are you from?’ he called out to me.
I told him.
‘Thought so.’ he said, ‘My daughter’s just gone there.’
‘Nice.’ I said, ‘Where exactly?’
‘Sydney.’
‘What for?’ I asked him ‘Work?’
‘No,’ he said, ‘chasing a boy.’
Then he shook his head and laughed.
Then a woman came out of the house and got in the passenger side of the man’s car.
He turned to her.
‘She’s from Australia.’ he said.
‘Oh!’ said the woman, leaning forward.
‘Our daughter’s just gone there.’ she said, loudly.
‘I know,’ I called back, ‘she’s gone chasing a boy.’
We all laughed at that, and then we said bye and they drove off down the road and I looked at that relief above the right window and pondered what colour I would paint it.

While I was drawing this a few cars went past, the drivers staring down at me, but that was all that happened.

While I was drawing this a man pulled up in front, in a Tesla.
Opening the door, he noticed me and called out ‘Am I ruining your view?’
I told him yes, so he shut the door and moved.
‘Why are you drawing this house?’ he walked over and said to me after he’d parked on the other side of the street.
‘It has good light,’ I said, ‘and a lot of trees.’
I asked him if he lived nearby and he told me he lived in the house next door to the one I was drawing.
‘Is it from the 50s?’ I asked him.
‘1948,’ he said, ‘and all the houses in this street were designed by the same architect.’
‘Oh yeh?’ I said.
‘Gregory Ayn,’ he said, ‘and all the trees were planted the same year by a landscape architect called Eckbo.’
I looked around at the houses.
‘They’re all the same design?’ I asked him.
‘Almost.’ he said, ‘but if you look at the one behind you, the front door is in a different place and the house has been turned around.’

While I was drawing this a woman in a Tesla pulled up in front, obscuring more than half the house.
I thought she might have been waiting to collect one of the schoolchildren that were wandering across the park where I was sitting.
But no child got in her car.
She had parked in a red zone and this was the reason, I imagined, that she had her flashers on.
I surmised by the tilt of her head that she was looking at her phone.
It was a good 20 minutes before she pulled away.
‘Fucking Tesla!’ I thought.

While I was drawing this a woman driving a big white car called a ‘Le Sabre’ stopped in the road in front of me, leaned across to the passenger seat, wound down the window and called out: ‘I’ve got some art stuff I’m going to give you. It belonged to a friend of mine but I doubt I’ll ever see him again.’
I paused my audiobook and said oh, okay, thank you.
She got out of her car and came around to the trunk, opened it and pulled out a large drawing pad.
‘Here,’ she said, dropping the pad down on the ground next to me, ‘there’s this.’
Just then a car pulled up behind her, but she didn’t acknowledge it and the fact that she was blocking the road.
Instead she opened the passenger door, leaned in, and from the floor, withdrew a pencil and handed it to me.
I looked down at it.
It was a carbon pencil and seeing it made me glad because earlier in the day I was contemplating buying one to start a drawing of my girlfriend Amy’s dog.
Then, without further ado, the woman, who was in a blue singlet, had cropped brown curls, and was wearing a sarong with tassels along the hem, got back in her car.
I watched her drive off as I sat fingering a page of the pad, which was newsprint.

Today’s audiobook: Jen Sincero’s How To Be a Badass

While I was drawing this I heard, over the sound of my podcast, a noise behind me and turning to look I saw a woman wearing a gaily coloured sundress staring down at me.
‘Ooooh,’ she said, ‘ooh!’
I smiled up at her as she smiled down at me.
‘Hello.’ I said.
‘Is that the house over there?’ she said, pointing to the house I was drawing.
Because she was so smiley I didn’t shittily say something like ‘cant you tell?!’
Instead I said yes, it is.
‘Wow,’ she said, leaning forward to get a closer look, ‘that’s some talent you have there.’
I told the woman thank you and continued smiling up at her until she stood up straight, said thank you to me and wandered off. 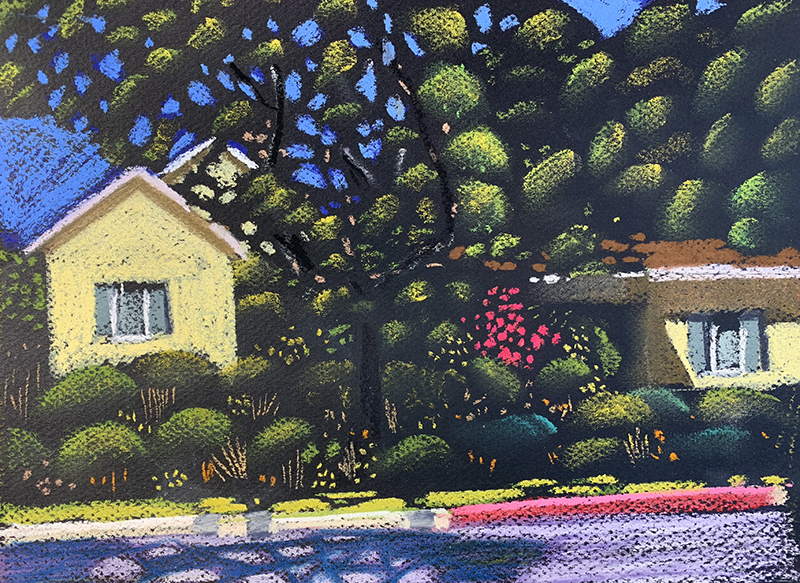 While I was drawing this 2 women, both leading Labradors, passed in front of me.
The first woman was wearing a wide brimmed straw hat, and large sunglasses.
‘Hello.’ she said.
Her dog, an oldish ochre-coloured chap, looked like it had some kind of fur disorder, it being clumpy and patchy.
I was feeling like having a break, so I hoped the woman might stop and chat and I’d ask her about the dog’s fur.
But she didn’t.
After her a woman leading 2 blond Labradors passed by on the other side of the street.
One of the dogs let out an aggressive bark.
‘Oh, stop it would you!’ I heard the woman say as the dog strained at the leash.

A Hundred Houses
Blog at WordPress.com.