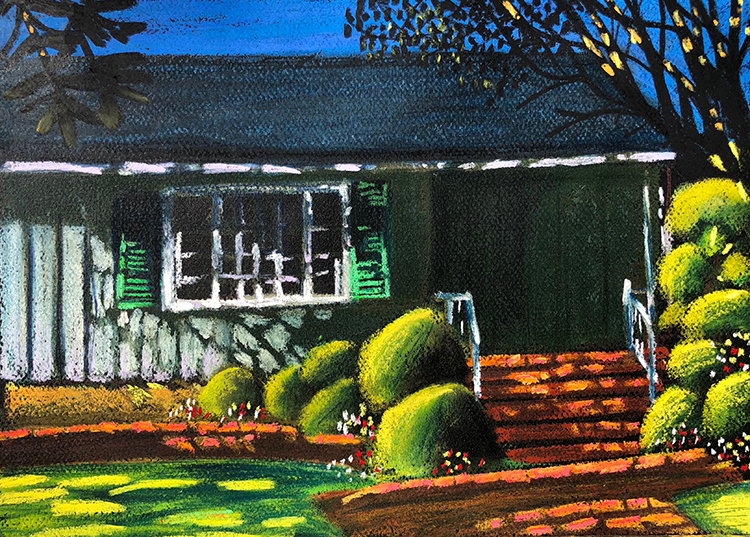 While I was drawing this, a couple (man and woman) walked along the footpath behind me and stopped and began to speak.
‘Ooh, let’s have a look.’ the man said.
I turned to look up at them, at their baseball caps and big round sunglasses, their polo shirts, and their grinning white faces, as they stood there looking at me down in the gutter grinning back up at them.
‘Oh, look at that,’ the man said and pointed at my drawing, ‘my, that’s pretty!’
The woman said nothing, no noise, not a nod of the head.
Only grins.
‘Is that chalk?’ he asked.
I set him straight by telling him it was soft pastel, and made a stroke on the paper with one I was holding between my fingers.
‘Much softer than chalk,’ I told him, ‘look how smooth.’
‘Uh-huh, uh-huh,’ said the man, who now had his hands on his hips, his legs slightly spread, and was nodding and looking down at the paper, ‘Uh-huh!’
I hadn’t turned my podcast* off for this disruption, so after the man made a few throwaway lines of encouragement at me, and told the woman ‘Let’s go, honey’, I went back to listening and drawing.
Then around 20 minutes later, as I was nearing the finish-line, a man walked along behind me and said- ‘Oh, I don’t want to startle you.’
I laughed and told him it was fine, he hadn’t startled me because, out of the corner of my eye, I had seen him coming.
The man, who was wearing a white baseball cap with a small logo on it, a white polo shirt, shorts and sock and trainers, stopped and laughed and told me he liked my drawing, and that he thought it was beautiful and that I’d gotten the light right.
‘Do you live around here?’ I asked him, and he told me no, and that he’d only be around for a bit longer.
‘I live in Houston.’ he told me when I asked him where he lived.
‘Do you know who lives in the house?’ I asked the man, who was standing to my right, slightly out onto the road, looking straight down at me with his hands folded behind his back.
He looked back toward the house, which had cracked paving, and patchy uneven lawn where the roots were bulging under the earth.
The porch was empty of ornaments, unlike the other houses in the street.
‘I believe an older gentleman lives there, alone, but the neighbours all look out for him.’ he said.
‘Oh, that’s lovely.’ I said.
Then he asked me if I would sell my drawing to the man in the house.
‘No,’ I said, looking up at him, ‘I go about the place drawing houses, you know, where the light is right. I’m going to move neighbourhoods soon though, I need more trees.’
‘Oh, I see,’ he said, ‘but what do you do with the drawings?’
‘I’m drawing a hundred,’ I said, ‘and I’m up to 14, and when I get to 100 I’ll have an exhibition.’
‘Oh, I see, wonderful!’ the man said, smiling.
‘Yes, and I write little stories about the people who stop to talk to me while I’m drawing, so you’ll be this drawing’s story.’
‘Oh,’ the man said in a slightly raised surprised voice, ‘really?’
‘Here’s the address.’ I said, and I told him the address of my blog, ‘Can you remember it?’
‘Yes,’ he said, ‘I’ll remember that.’
‘Good,’ I said, ‘You can read about yourself!’
Then we both smiled and said some niceties to each other and told each other to have a good day, and he left, and I went back to my drawing, giving the grass a bit more green, the paving a bit less crack and adding a few red and white flowers that perhaps the old man in the house might have liked.

View all posts by Le Busque