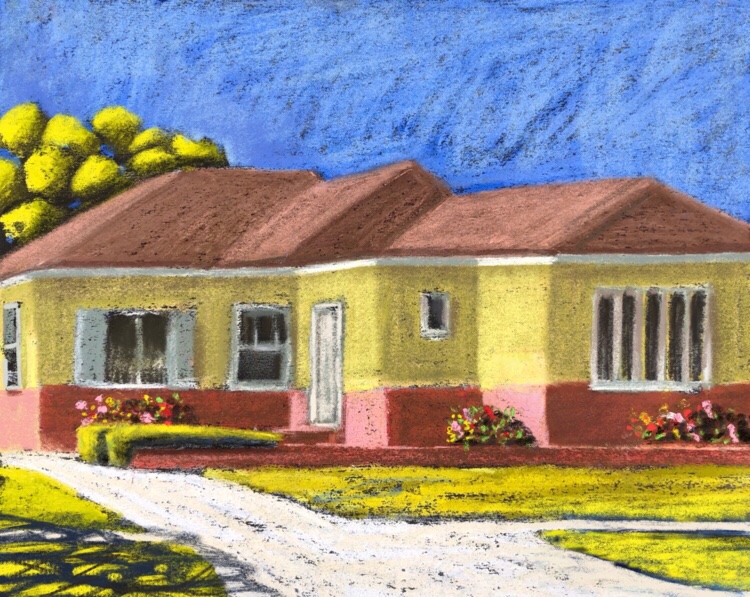 While I was drawing this a man who was just about to get into his wreck of a car on the other side of the street looked over and saw me, and after looking both ways, ran across the street and asked me what I was doing.
‘I’m drawing that house,’ I said to the man as I pulled one earbud* out.
Then the man, who was dressed as if he might be a mechanic, in dirty greasy black clothes, told me that the drawing was beautiful and that I was really talented.
‘Thank you.’ I told him.
‘I can’t draw at all,’ he said, ‘I wish I could.’
‘You could if you practiced,’ I said to him, and smiled.
The man laughed very loudly and said nah.
‘Anyway,’ he said, ‘gotta go. Keep up the good work. Bye!’
‘Thanks.’ I said, and he gave me a little wave.
And as he ran back across the street to get into his wreck of a car, I noticed he that the hem of his jeans legs were badly frayed and he was wearing no shoes.
Then I went back to my drawing until about 20 minutes later when a woman in light blue scrubs stopped and said- ‘Excuse me, I just wanted to tell you that’s a beautiful drawing. Wonderful.’
‘Oh, thank you.’ I said.
‘I wish I could do that.’ she said, and I smiled and nodded.
‘Yes,’ I said, ‘it’s really,…good fun.’