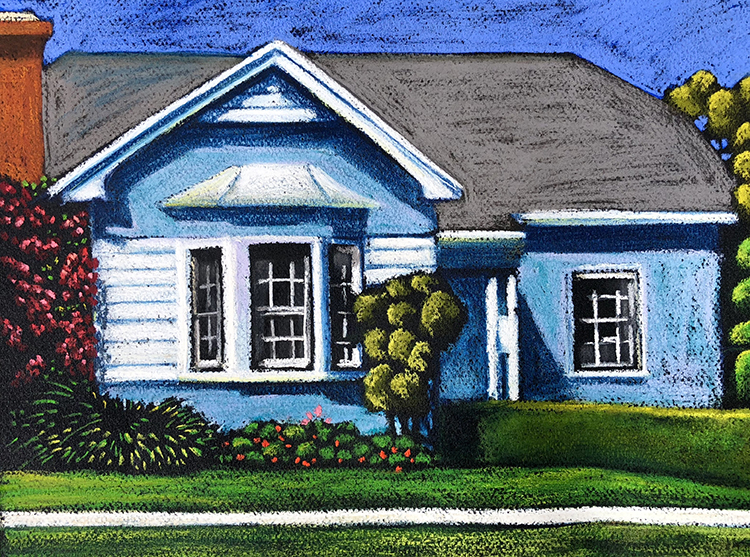 While I was drawing this a woman came out and stood in the driveway, hands on her hips, and stared at me for a few, maybe 20, seconds.
I wanted to wave to her, but the idea of her coming over to talk to me and me having to explain to her what I was doing: telling the same story about my hundred houses project, was more than I could bear, so I decided to keep my mouth shut.
Eventually she dropped her arms and turned and walked away, and I put my eardbuds* in and got to work.
About 20 minutes later, a man reversed down the driveway behind me in a black SUV, stopped just before the road and leaned his head out of the window and asked me a question.
‘Can I help you?’ he said, his face expressionless, his voice authoritarian, like a government official with a small amount of power but a big head.
‘No,’ I said to him, sitting there on the kerb on the edge of his land, ‘I’m just sitting here drawing the house across the road.’
Then I heard something I’d call a delighted squeal and a woman leaned forward from the passenger seat and smiled at me and gave me a little wave.
I returned the smile and wave, and then the man, who was wearing a black cowboy hat and had a little goatee beard and spoke with some style of Southern accent, smiled and told me to have a nice day and finished his reversal out of the driveway and drove off down the road.
I sat there for a moment, watching them drive off and thought about him asking me if he could help me, when what he really meant (from a primal perspective) was why are you on my territory, stranger, and are you here to kill me and my breeder and steal my fire stick.